Please contact Tim Hanley at the College if you are interetsed in playing: t.hanley@stonyhurst.ac.uk

If you are interested in playing for any of the Wanderers’ teams please do contact the representatives.

On Sunday 11th October, Benedict O’Connor and Simon Whittle OS 13 (joint masters in charge of croquet), represented the Stonyhurst Wanderers at the Pendle and Craven Association Croquet tournament. They played a whole day of croquet in the lovely Pennine village of Earby. Opponents came from across the North, with a couple even travelling down from Scotland. Because of the broad range of skill and experience of the players, the tournament was ‘handicapped’, meaning players with less tournament experience had some free shots to play with, and the most experienced had the unenviable task of ‘peeling’ some of the balls through the hoops (that is, scoring points by forcing one ball through with another). The game, with only a few additional protocols (eg, about moving balls with one’s feet or the mallet), lends itself well to Covid regulations, and many a friendly conversation was had across the croquet lawns. As the age profile of croquet players tends to be on the older side, there was much enthusiasm, and support offered, for the fledgling croquet club at the College, and there is hope that we may be able to organise some external coaching and tournaments for the pupils at some point. Neither of the Stonyhurst players took first place, but they did come away with some more ‘wins’ against their names, and having strengthened links in the croquet community. 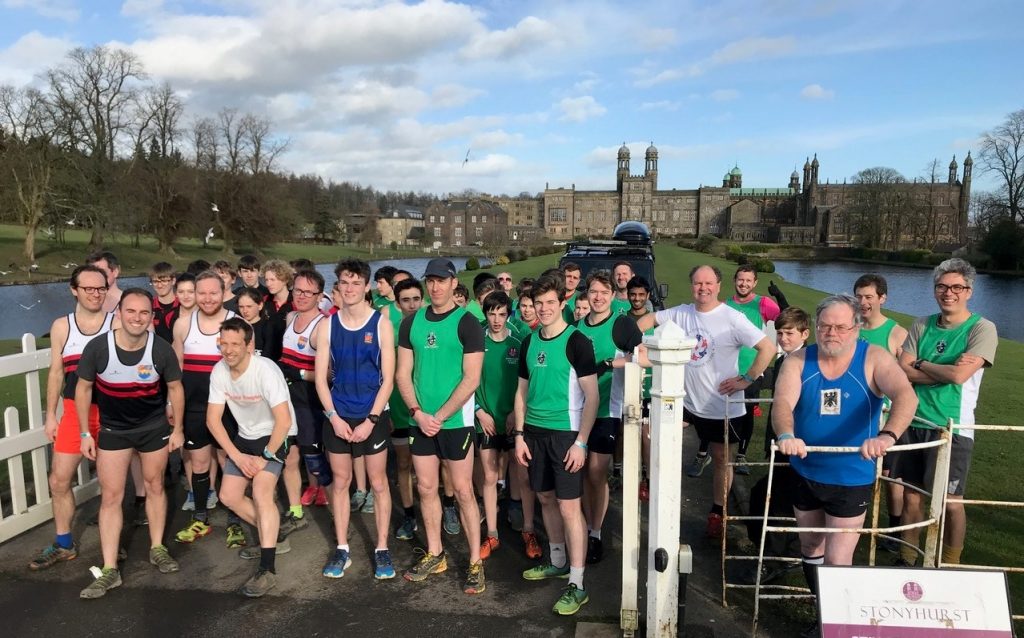 Thank you very much to those who arranged, participated in or supported the annual Old Stonyhurst versus Old Ampleforth Race for the Newton-Carter trophy named after Christopher Newton-Carter OS 68 who was educated at Beaumont and Stonyhurst and who sadly died in the September 11 attacks in New York.  In particular thanks to Paul Wilmore, the Stonyhurst cross-country master.  To remind you, this is the race in memory of Chris who raced in the inaugural cross-country race between the two schools more than 50 years ago, the trophy is run in his memory at the request of his former team mates.

Although the threat of Storm Ciara hung over the race, we were greeted by particularly temperate running conditions for the Ribble Valley. The OS and the OA put out a strong team with both girls’ and boys’ teams from both schools competing. There was also a lone runner representing Lancaster Royal Grammar School.

To the surprise of all, the race was won by a country mile by the lone runner from Lancaster Royal Grammar School! Stonyhurst boys William Hall and Nicolas Rumpf came 2nd and 3rd respectively. Well done to them because in recent times the race has been dominated by the old boys.

The result in the Newton-Carter Trophy was a very close victory for the OAs – the first time since the race began that the Trophy has been won by the away team. Rory Smith (OA) won the race whilst Greg O’Connor OS 10 was the first of the OS runners in 3rd place with Richard Kenyon OS 98 close behind in 5th.  Katie Rowland OS 07 was the first female OS runner with Mary-Maye Lorriman OS 98 just behind. Mary-Maye’s husband Hugh-Guy was running for the OA and they were supported by their son who is at SMH so it was a truly family affair.

Many thanks to Simon Rowland OS 05 who flew in from Stockholm for the race and for Hideo Takano OS 84 who kept up his excellent record of attendance. Michael Wylie-Carrick OS 79 continued his tradition of running an additional 50m in order to complete the original course which may or may not explain why he was well beaten by his son Joseph running for the College team! Jonathan Muller OS 72 brought up the rear but much enjoyed running the course for the first time in over 40 years. Special mention to Tom Bedingfeld (OA) who escaped his son’s parents’ weekend at Ampleforth to travel across the Pennines in the school minibus to compete in the race – his dedication contributing to the OA victory. The Stonyhurst boys’ team were victorious over their Ampleforth counterparts whereas the Ampleforth girls were victorious in their race respectively.

We retired to the Bayley Arms afterwards to watch England vanquish Scotland in a weather dominated fixture. A select few then attended an excellent dinner at St Mary’s Hall also attended by Rory Henderson (OA) representing the OAs. The night was not however over for those of us staying in Theodore House (the new luxury Retreat Centre on the site of the Old Mill) where the Liverpool Catholic Chaplaincy were holding a retreat. We were greeted on our return from dinner by 2 nuns from Missouri leading the dancing at the after party – needless to say we participated and the sight of Michael Wylie-Carrick pulling out the dance moves in full tweed will live long in the memory!

The long drive south on Sunday morning was testing with Storm Ciara at full throttle and Lancashire underwater – at one point driving across a lake where the Ribble had flooded the road at Ribchester Bridge, I seriously doubted I would make it out of Lancashire!  However, escape I did. An excellent weekend meant that it was fully worth the effort.

On Saturday 7 September two OS teams made it to the top flat on a clear warm day and a gentle breeze. The first team were in their new kit and had even arrived early to have a proper warm up.

In the first team encounter, the match started at high tempo and to my surprise this was maintained for the whole of the first half! Strong performances from Bradley Sugden OS 16 and Jonno Hallam OS 12 helped the OS into a strong 4-1 lead going into half time. However the second half was to prove a lot harder as the first team kept the speed up and Adam Rawkins OS 12 was beginning to feel the pressure down the left wing. With ten minutes to go the score was 5-3 and closing. However Joe Topping OS 15 kept his presence to pounce on mistakes twice in quick succession to seal the game. Jacob Connolly OS 12 also scored twice. The match ended 7-4 to the OS.

In the second team game, the OS who had just arrived and got to meet each other, found themselves under the cosh and went into half time 6-3 down and looking strained! However the new centre back pairing of Guy McClennan and Greg O’Connor OS 10 plugged the gap which gave enough time for Will and George Kelly to go through the gears and hit the net with precision. Joe Rackham, a ringer! Tobias Dean OS 19 and Greg O’Connor also netted. The match ended 10-7 to the OS

The included picture sums up the afternoon. The OS really enjoyed the game and tea after and we really enjoyed them coming in to play. The first and second team now have the advantage of going into the new season with match experience and the OS retain their unbeaten record. The fixture worked really well being at the start of the year in terms of people being available, pitches ready and of course good weather. My thanks to Jonno and Jacob for all their help organising it. We will be looking to maintain this event on the first Saturday in September from now on. 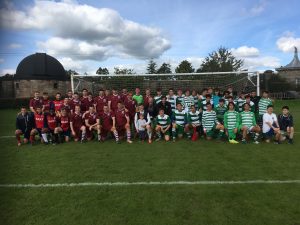 On a windy summer day the Wanderers Croquet team had the pleasure of playing their annual croquet match against current students. Provisions for playing croquet at the College have been greatly improved in the last couple of years. The Philosopher’s tennis courts now have three permanent croquets lawns and this of course means that the students are well practiced. Knowing this would be the case it was decided by Simon Whittle OS 13 that we should have a pre-season practice weekend at his place of work, The Oratory School. In the year of its founder’s canonisation, Cardinal John Henry Newman, the school had a joyous atmosphere. The practice was needed and meant that we were well placed to beat the students at the annual match. Credit must be given to Fabian Twist OS 11 and Mathew O’Connor OS 13 for carrying the OS to victory against a strong student side led by Rory Wylie Carrick who on a personal note took great pleasure in beating his father Michael OS 79 The evening brought a very convivial candlelit dinner. With the croquet section now being in its fifth year we have developed a consistent group of players with friendships formed across year groups and would be delighted for more interested OS to be in touch. 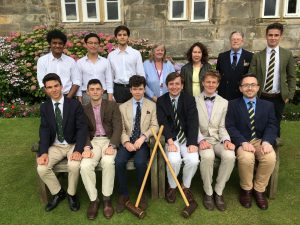