The revised edition of “The Making of an Immigration Judge” by our former President of the Association, James Hanratty, has just been published. It is available from all good bookshops and also Amazon (click here). This amusing, entertaining and thought provoking book describes his education at Stonyhurst and the ethics learned there applied throughout his life. As Lord Hennessy wrote in the Foreward, “James is loyal and warm towards the many institutions that have shaped him including Stonyhurst College where he was educated” 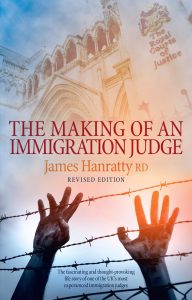 James found himself as one of only 15 lawyers advising three Lord Chancellors in the House of Lords. He is a former Chief Executive of the Royal Courts of Justice in the Strand. He had two spells in Hong Kong latterly as the Legal Adviser to the Government on the Handover to China. He served in the part time Royal Naval Reserve mainly at sea for 22 years and was awarded the Reserve Decoration (RD). He then served on the Bench as an Immigration judge for 16 years and was elected by his judicial peers to be President of the Council of Immigration Judges for the UK. All these experiences are described with humility and humour, sometimes with hilarious anecdotes.

He vividly describes the plight of migrants and cases he heard where the disadvantaged were helped but those who sought to play the system by deceit were exposed. He analyses Government proposals for a Points Based System and discusses problem of Channel Migrants. He sat on the Lessons Learned Review on Windrush whose report was recently published. He is a sought after speaker at Literary Festivals around the country. He has conversations in the book about international and political problems including the persecution of Christians in so many countries. He is critical of Immigration practice and law, domestically and internationally with its unnecessary complexity.

He describes his triumphs and disasters in the Navy and as an experienced sailor, just the same. The photo is of him steering his boat Alana III wearing the White Ensign of the Royal Yacht Squadron. He is also a member of The Athenaeum and of the Hurlingham Club where he met his beloved wife, Pam, 45 years ago. A son and daughter went to Stonyhursrt; the other daughter went to St Mary’s Ascot.

This book is a really good page turning read, ideal in these harsh times when so many are still in lock down.