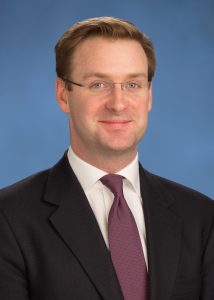 The College has announced the appointment of Stephen Withnell as director of strategic development.

Stephen is an OS and a current Governor of Stonyhurst.

He has made an outstanding contribution as a Governor and has chosen to join the College Executive to focus on this important role.  Stephen’s appointment will bring a unique combination of experience and expertise to complement that of the College’s Senior Management Team in delivering its strategic plans.  Stephen will step down from the Governing Body in order to commence this new role in September 2018.

John Browne, headmaster of Stonyhurst College, said: “I am delighted Stephen has chosen to join us at this exciting time in the development of the College and Saint Mary’s Hall. Stephen brings to Stonyhurst an outstanding track record at the highest level of international business and governance.

“His experience and relationships will be of enormous value to the College, for example, in advancing our work in Fundraising, in International and Strategic Partnerships and in External Relations.  We look forward to welcoming Stephen, his wife Victoria and their two sons, Henry and George, to Lancashire and to the College.”

Prior to joining Goldman Sachs, Stephen worked in the Investment Banking Division of Citigroup Global Markets in London and Hong Kong for four years. In a 16-year career in Investment Banking, Stephen has advised on more than US$150 billion of M&A, strategic and fundraising transactions, and is a previous speaker at the FT Global Commodities Summit.

He is also an experienced director and trustee who serves as a governor of Westminster Cathedral Choir School and on the Investment Committee of the British Jesuit Province. A member of the advisory board of Durham University Business School, he is also a freeman of the City of London.

Stephen said: “Stonyhurst is thriving. For more than 400 years the school has been challenging its pupils to do their very best and to go forward and make a real difference to the world. I’m excited to move with my family to the wonderful Ribble Valley and can’t think of a better place to base a family or for young people to go to school.”